This blog covers trips from the book and other favorites.

Touring Surf Skis – Not All About Racing and Surfing

Surf skis have a reputation for being all about racing and downwinding but there are stable touring surf skis with storage hatches which are ideal for day trips, overnights and performance paddling.

I turned to surf skis as an alternative to sea kayaking. After a near drowning stuck upside down in a closed deck skirted surf kayak 18yrs ago, I began to look for smarter sit-down and open cockpit kayak options.

And I was tired of hauling around 60lb kayaks and having a special hydraulic lift to get my kayak on the car.There are a few stable surf skis like the Carbonology Cruze, Epic V6 and Stellar Sit on Tops (also surf ski’s) with storage hatches for day trips and overnights. But are still 2x faster than sea kayaks and are also great for touring, casual paddling, downwinding and surfing.

Advantage of a Surf Ski over a Sea Kayak for Trips?

Tip: Super light skis are not tough like a heavy sea kayak. Strengthen with a keel strip under the hull.

Check out my video showing the details for the Carbonology Cruze.

What to Look for for Touring Surf Skis?

Tall folks like me (6'-5") have less skis to choose from if you want to do the leg drive common in surf ski paddling.

Stellar Kayak's ‘Sit on Tops’ which are stable surf ski’s with hatches that do fit tall folks.  Check them out..

I found the Epic V6 too short for me and tight on the hips.

Surf skis have scuppers in the cockpit that drains water while moving. Surf ski scuppers have 'ventruli's that stick out the hull and create an eddy and suction when moving.

Yes the ride is wetter but you're not stuck in a cockpit requiring a wet exit and/or roll.  You can easily get out and it's fairly easy to get back in.

Like a sup, you can sit sideways with your legs over the side. Fun for wildlife viewing

Get Carbonology surf skis from Sitontoppros.com in Bellingham, WA.  Mention I referred you for 5% off.

Check out my year round surf ski, kayak and SUP classes in the Pacific Northwest – www.salmonbaypaddle.com

I've just started a new Kayaking Puget Sound Facebook Group so you all can post trip ideas, trip reports, boat or board reviews or for sale items and any other related paddling questions.

I'm a big fan of webcams over looking Puget Sound for checking tide levels, to track incoming freighters to surf, ship spotting and to see how the Sound looks in different conditions.

Here' s a few of my favorites:

Ballard Elks Sunset Cam - I helped install this one as our Elks Paddling Club was looking for a way to see Shilshole Bay for all of the above purposes.  We even saw Poulsbo's 4th of July fireworks show last year! (it goes black and white at night).

Port Townsend Web Cam - You can control the direction of this cam! 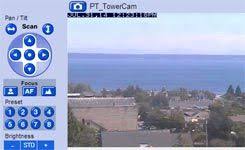 Race Rocks Cam - SW of Victoria BC - You can control it and there's sound of the wildlife.  Race rocks gets a ton of wind, usually blowing 50-60kts!

Skunk Bay Webcam - Skunk Bay is between Hansville and Cape Foulweather on the Kitsap Peninsula.  Track Seventy48 racers in June! 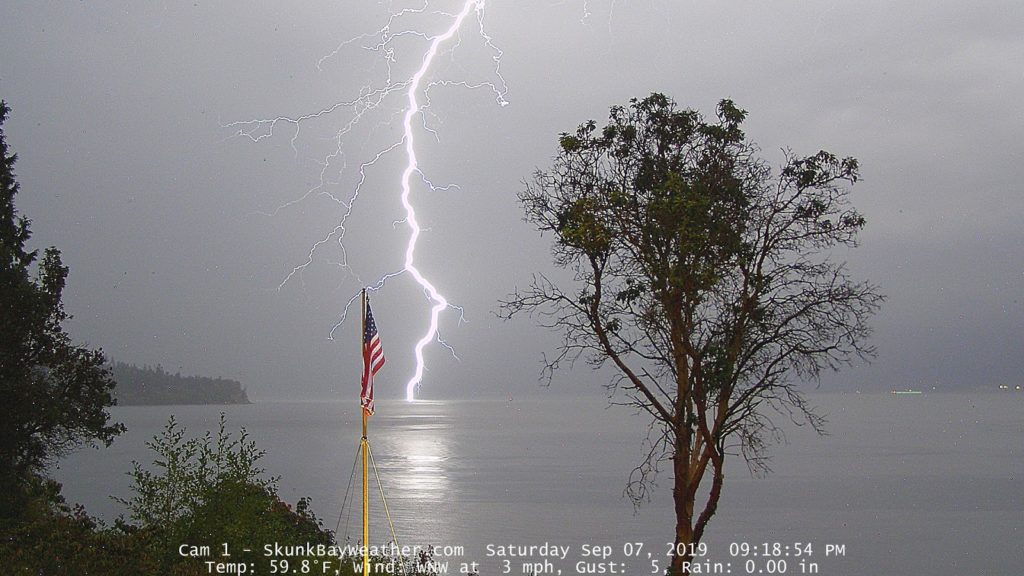 With limited water access with Seattle city parks being closed due to Covid-19, you can still access the water using Street Ends.

Street Ends are not traditional parks and are often overlooked.  In the past few years, the city has been improving a few street ends, such as E Allison Street and 28th Ave in Ballard.

Some are just turn-a-rounds, others don't have good water access, or lack easy parking. Scout out street ends near where you want to paddle. 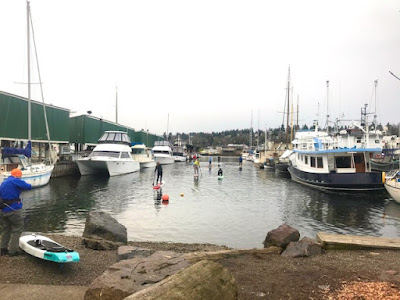 At the time of writing this, the covid-19, otherwise called Coronavirus is in the news and beginning to span to globe.  With that, I remembered about the quarantine station on Diamond Point in the late 19th century.  Diamond Point is Trip #37 in the book.

Diamond Point is also in the news as adjacent Miller Peninsula State Park will be expanding quite a bit fairly soon.  Read more from the Wa Trails Association 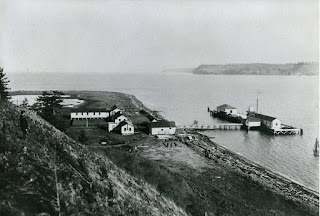 Here's some words from the History Link article on the quarantine station..

This essay made possible by:
The State of Washington
Washington State Department of Archeology and Historic Preservation.

In November 1893, the Federal Marine Quarantine Station for Puget Sound opens at Diamond Point, located at the northeastern tip of Clallam County across Discovery Bay from Port Townsend.  The Quarantine Station provides disinfection services for vessels wishing to enter Puget Sound, and an isolation hospital for passengers found to be suffering from or suspected of carrying infectious disease.  The facility will grow from three to 27 buildings
over the course of its 43 operational years. 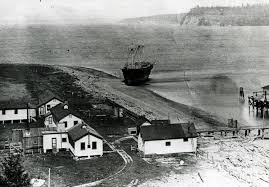 A "Pest House" for People
Dr. B. S. Conover, previously in charge of quarantine services at the Port Townsend Marine Hospital, was the establishing physician.  After a few months he was succeeded by Dr. William G. Stimpson.
The site of the quarantine station, now Diamond Point but then known as Clallam Point, was part of a military reservation established by President Andrew Johnson (1808-1875) in 1866 and dissolved in 1870. The Diamond Point land was then privately owned until 1892, when the federal government purchased 156 acres on which to build the quarantine station.
The Quarantine Hospital was an adjunct of the Port Townsend Marine Hospital.  The By Juan de 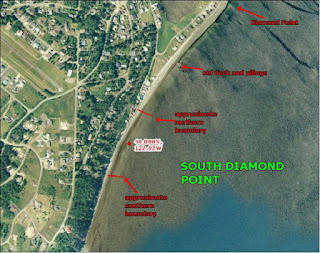 Rob Casey is author of Kayaking Puget Sound and the San Juan Islands, 60 Trips and Stand Up Paddling Flat Water to Surf and Rivers, both by Mountaineers Books.  He owns Salmon Bay Paddle a SUP school in Seattle.  Get in touch: rob@salmonbaypaddle.com 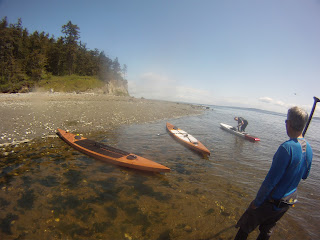 Launching from the boat ramp beach at Port Hadlock, we enjoyed flying down the canal using the ebb then paddled around the south end of Marrowstone Island to Kinney Point. Trip #34
It was low tide so aside from our fins hitting sand a few times we enjoyed the marine life 2-3' below our feet. I remember over dressing for the unusually warm early Spring day.
At Kinney Point (see pics) we landed and explored the WWTA Cascadia Marine Trail site up the hill. There was a bench on a forested medium bluff overlooking the beach and a few forested tent sites. Looked like a great off the beaten path spot.
We paddled back after a bit and found enough eddies for eddy hopping our way back up the ebb current. Brandon took the west side and we both found a good options. 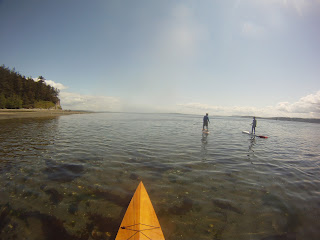 In the pic, Brandon and I have his 14' stitch and glue SUPs with internal storage. He has since designed 18'x26" carbon SUPs with storage, I think available only by request. Brandon is available at Turn Point Design in PT.
The currents in PT canal are tricky and not a clear ebb and flood per other flows nearby. Make sure to check local current and cruising guides to time it right. The Portage isn't bad if you have to!

Rob Casey is author of Kayaking Puget Sound and the San Juan Islands, 60 Trips and Stand Up Paddling Flat Water to Surf and Rivers, both by Mountaineers Books.  He owns Salmon Bay Paddle a SUP school in Seattle.  Get in touch: rob@salmonbaypaddle.com 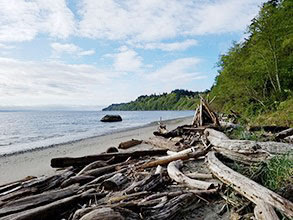 Views of Point No Point and the beach between the PNP Lighthouse and Eglon Beach. Trip #20 in the book.

The point is a glimpse of what West Point and other low points around the Sound looked like prior to being developed.  Lots of history there.

I paddled it during the Seventy48 Race last year. Beautiful mostly undeveloped beach worth checking out.  Fun tide-rips off PNP. 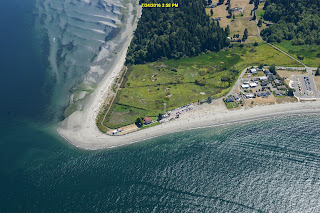 I ended my Seventy48 race at the point realizing I'd rather be enjoying the beach vs trudging on for last 20 miles (had already done 50 in less than 24hrs).

Access via Eglon Beach or PNP. No legal camping in there but lots of great guerilla spots.

Get a burger and shake at Hansgrille at Hansville just beyond the point. Fun local scene there.

Photos from the web.

Rob Casey is author of Kayaking Puget Sound and the San Juan Islands, 60 Trips and Stand Up Paddling Flat Water to Surf and Rivers, both by Mountaineers Books.  He owns Salmon Bay Paddle a SUP school in Seattle.  Get in touch: rob@salmonbaypaddle.com
Posted by Rob Casey SUP Guide, Photographer at 5:17 PM No comments:

Learn to SUP or Kayak with me! 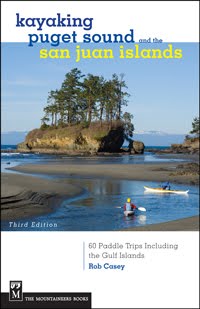 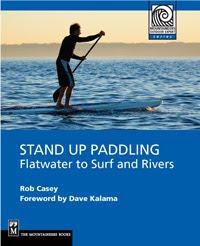 Check out My SUP Book!